We took the easier route with the tour December 1, 2014.  Unfortunately, I wasn’t posting much on my travel blog yet so I don’t remember everything that happened.  I do highly recommend the tour if you’re in New York City.

If you want to go, other than practicing, Carnegie Hall is a concert venue in Midtown Manhattan located at 881 Seventh Avenue, occupying the east stretch of Seventh Avenue between West 56th Street and West 57th Street, two blocks south of Central Park. 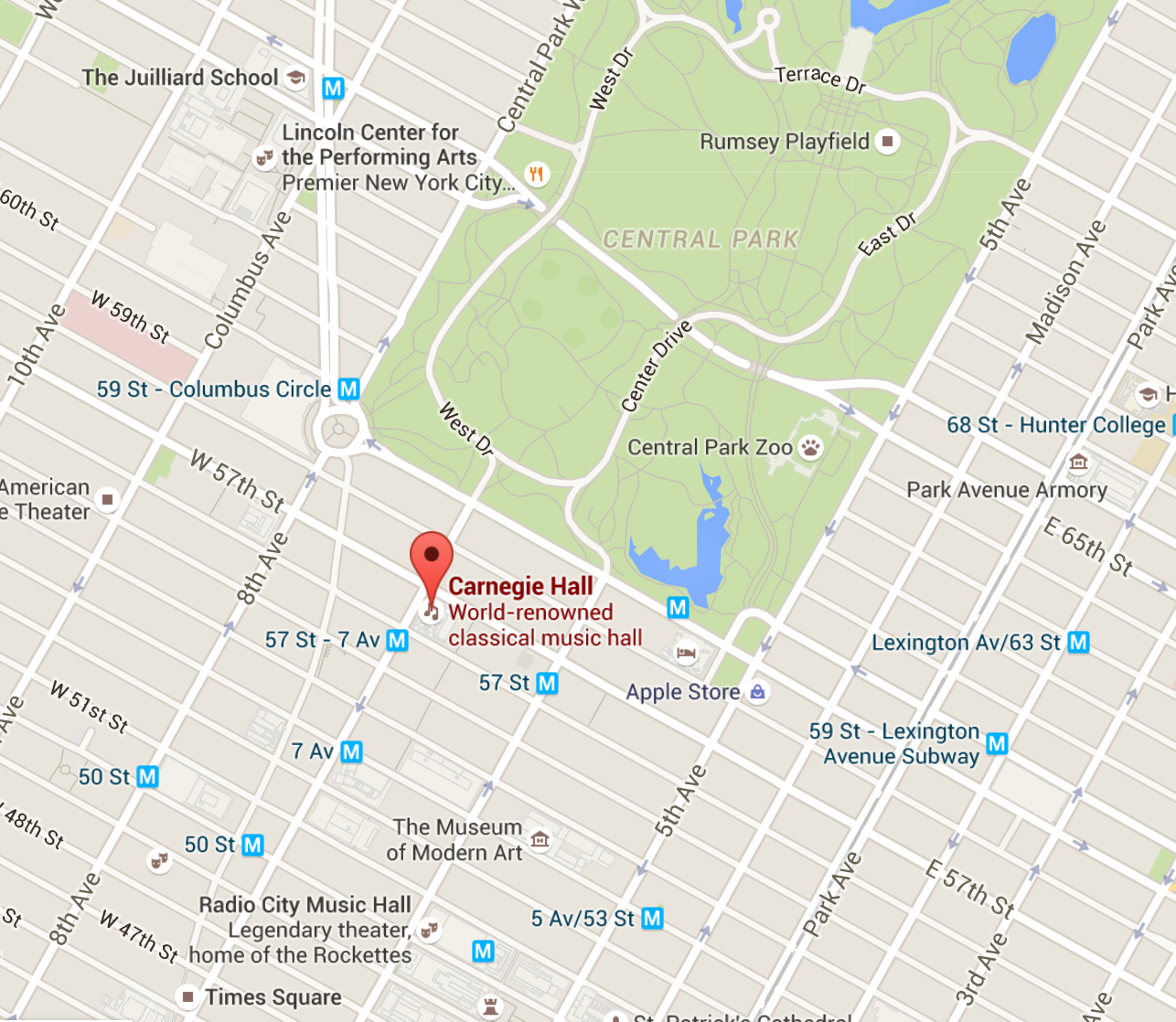 The tour was very inexpensive, maybe $10 each.  We were taken by elevator up to the Main Hall (Isaac Stern Auditorium/Ronald O. Perelman Stage) first.  The stories that were told were fascinating!  I don’t remember most but I remember the guide telling us that after renovations audience members complained of a buzzing sound.  The floor had to be removed…

NEW YORK (AP) _ For nine years, the people who run Carnegie Hall insisted there was nothing wrong with the acoustics at the famed concert hall.

Wednesday, they sang a different tune

This summer, a layer of concrete, apparently left over from a major renovation job in 1986, was discovered under the stage. The concrete was ripped out and a new floor was installed that administrators say should improve acoustics.
Since the renovation, musicians and critics have complained about the acoustics, saying the sound the hall was world famous for wasn’t the same, that the bass had become washed out and the higher instruments harsh.

Executive Director Judith Arron said Wednesday she had been assured there was no concrete under the stage since arriving at the hall in 1986.

But the tongue-in-groove maple stage floor, which usually lasts 20 years, had warped so badly after just nine years, it was difficult to push a piano across it.

The hall closed for repairs after three Frank Sinatra tribute concerts the last week in July. “As we tore the whole floor up,” Arron said, “we learned we had a lot more hard substance than we had anticipated.”

She speculated the concrete was added to reinforce the stage while scaffolding was on it during the 1986 renovation and then simply left there in workers’ haste to finish.

The concrete had been placed under two layers of plywood, on which the maple stage floor rests.

“Concrete retains moisture,” Arron said. “As the moisture collected in the concrete, it went into the plywood, which expands with moisture and pushed up the floor.”

Jim Nomikos, the hall’s director of operations, compared the removal of hundreds of pounds of concrete to “an archeological dig.”

Nomikos said the floor is now constructed the way it was from Carnegie Hall’s opening in 1891 until 1986.

“In my opinion we’re not reconstructing the floor. We just restored it,” he said. “I think what we have now is a floor that will have some resonance, as opposed to a floor that was dead.”

Aaron said there are no plans to sue anybody for the way the floor was laid in 1986. “We’ve been focused on doing the job right,” she said. “We think this is going to be great.”

The new floor will meet its first test Sept. 26, when the Philadelphia Orchestra plays. The hall’s official gala opening for its 105th season will be Oct. 5 by the Boston Symphony.

I remember the guide not being happy with us because I knew the answers to some of the questions she asked such as Tchaikovsky conducting at the opening.  When she mentioned that Ignacy Jan Paderewski had made his debut there,  Tom piped up that he had lived near Steinway Hall (and that Michael and I had just played there in the final concert in the old building).  She gave us the evil eye and we stopped talking so much 🙂

Plaque on Steinwall Hall (old building). This was just after Michael and I played there. 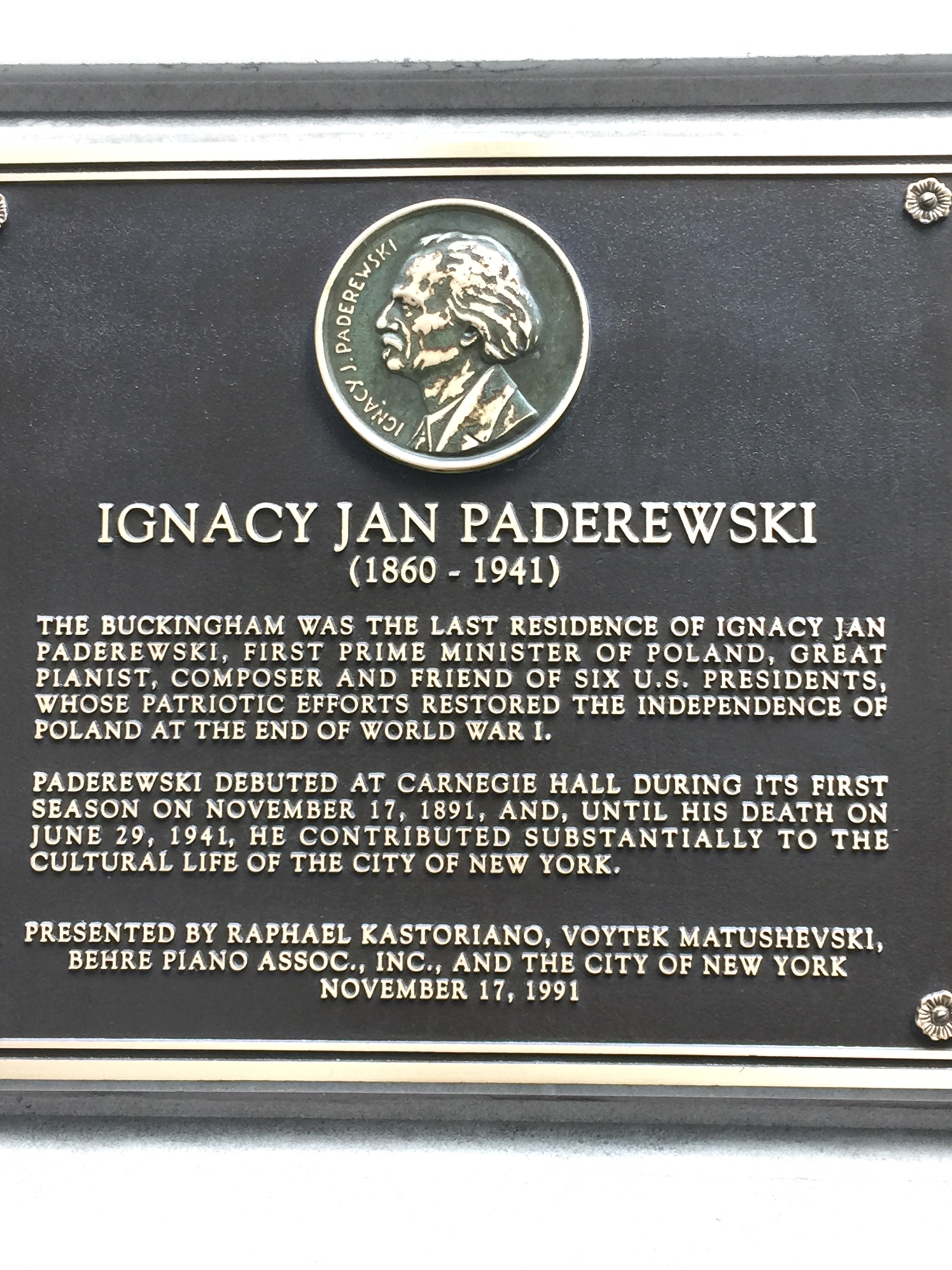 There were many, many pictures on the walls of people who had performed there.  All in all, a fantastic tour.  Take it if you’re in NYC!

William Tuthill’s design reflects Gilded Age architectural tastes and engineering.  Since the Hall was built shortly before the advent of structural steel construction, its walls are made of fairly heavy brick and masonry, to carry the full load of the structure without the lighter support that a steel framework soon made possible. The Italian Renaissance design of the exterior reflects the eclectic architectural tastes of the period, which look to European models of earlier centuries for inspiration.  Tuthill deliberately chose to keep the styling and decorative elements simple, elegant, and functional, focusing his energies on designing an excellent acoustic environment.

I came across this interesting 1947 movie about Carnegie Hall for my Music Studio Blog and I’m posting it here, as well.

Storyline:
A mother (Marsha Hunt) wants her son (William Prince) to grow up to be a pianist good enough to play at Carnegie Hall but, when grown, the son prefers to play with Vaughan Monroe’s orchestra. But Mama’s wishes prevail and the son appears at Carnegie Hall as the composer-conductor-pianist of a modern horn concerto, with Harry James as the soloist. Frank McHugh is along as a Carnegie Hall porter and doorman, and Martha O’Driscoll is a singer who provides the love interest for Prince. Meanwhile and between while a brigade of classical music names from the 1940’s (and earlier and later) appear; the conductors Walter Damrosch, Bruno Walter, Artur Rodzinski, Fritz Reiner and Leopold Stokowski; singers Rise Stevens, Lily Pons, Jan Peerce and Ezio Pinza, plus pianist Arthur Rubinstein, cellist Gregor Piatigorsky and violinist Jascha Heifetz.