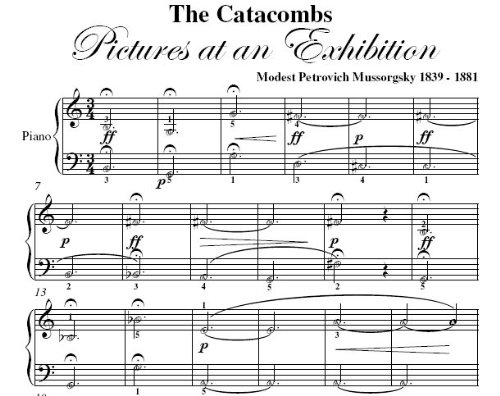 Modest Mussorgsky composed this multi-movement work in memory of his friend, artist Viktor Hartmann. Each movement corresponds to a picture in Hartmann’s gallery, with one pairing with Hartmann’s Paris catacombs. The painting depicts Hartmann and two other men walking through the labyrinthine catacombs, illuminated only by lamplight.

The movement is in two distinct parts. Its two sections consist of a nearly static Largo consisting of a sequence of block chords with elegiac lines adding a touch of melancholy and a more flowing, gloomy Andante that introduces the Promenade theme into the scene.

The first section’s alternating loud and soft chords evoke the grandeur, stillness, and echo of the catacombs. The second section suggests a merging of observer and scene as the observer descends into the catacombs. Mussorgsky’s manuscript of “Catacombs” (shown right) displays two pencilled notes, in Russian: “NB – Latin text: With the dead in a dead language” and, along the right margin, “Well may it be in Latin! The creative spirit of the dead Hartmann leads me towards the skulls, invokes them; the skulls begin to glow softly.”

The whole suite is really good – there is a copy of Mussorgsky — Pictures at an Exhibition (Alfred Masterwork Edition) in the O’Connor Music Studio, if you want to give it a try.

2 Reply to “Halloween Music: “Catacombs” from “Pictures at an Exhibition””