Happy Birthday is a song that I like to have each of my students learn at various levels appropriate to their level. When a friend or family member has a birthday, it’s great to be able to sit down and play. 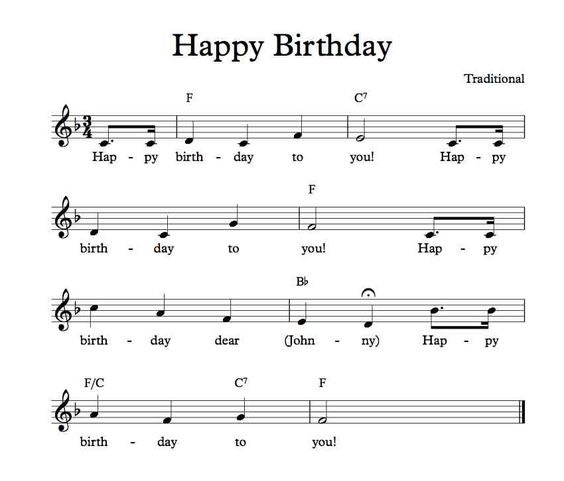 It’s only been fairly recently that piano students could have this music in their books.

The melody, or part you sing, of “Happy Birthday to You” comes from the song “Good Morning to All”, which has traditionally been attributed to American sisters Patty and Mildred J. Hill in 1893, although the claim that the sisters composed the tune is disputed.

Patty Hill was a kindergarten principal and her sister Mildred was a pianist and composer.  The sisters used “Good Morning to All” as a song that young children would find easy to sing.  The combination of melody and lyrics in “Happy Birthday to You” first appeared in print in 1912, and probably existed even earlier.

Lots of legal stuff below which you can skip…

None of the early appearances of the “Happy Birthday to You” lyrics included credits or copyright notices. The Summy Company registered a copyright in 1935, crediting authors Preston Ware Orem and Mrs. R. R. Forman. In 1988, Warner/Chappell Music purchased the company owning the copyright for US$25 million, with the value of “Happy Birthday” estimated at US$5 million. Based on the 1935 copyright registration, Warner claimed that the United States copyright will not expire until 2030, and that unauthorized public performances of the song are illegal unless royalties are paid to Warner. In one specific instance in February 2010, these royalties were said to amount to US$700. By one estimate, the song is the highest-earning single song in history, with estimated earnings since its creation of US$50 million.In the European Union, the copyright for the song expired on January 1, 2017.

The American copyright status of “Happy Birthday to You” began to draw more attention with the passage of the Sonny Bono Copyright Term Extension Act in 1998. When the U.S. Supreme Court upheld the Act in Eldred v. Ashcroft in 2003, Associate Justice Stephen Breyer specifically mentioned “Happy Birthday to You” in his dissenting opinion. American law professor Robert Brauneis, who extensively researched the song, concluded in 2010 that “It is almost certainly no longer under copyright.”

In 2013, based in large part on Brauneis’s research, Good Morning to You Productions, a company producing a documentary about “Good Morning to All”, sued Warner/Chappell for falsely claiming copyright to the song.  In September 2015, a federal judge declared that the Warner/Chappell copyright claim was invalid, ruling that the copyright registration applied only to a specific piano arrangement of the song, and not to its lyrics and melody.

In 2016, Warner/Chappell settled for US $14 million, and the court declared that “Happy Birthday to You” was in the public domain.

Legal stuff is finished and people can now sing and play “Happy Birthday to You” whenever and wherever they want.

One of my all-time versions of Happy Birthday, in duet form – and I have the music if you want to tackle it.

Mrs. O’Connor is a music teacher with over 30 years experience teaching both privately and as a music teacher in the public school system.
I teach piano, organ, electric keyboard, ear training and music theory to students of all ages, abilities, and backgrounds.
I am a certified Joytunes Teacher (Piano Maestro).
Students will learn music theory, performance skills, ear training, music history, composition, and much more!
Lessons are taught based on the student’s needs and learning styles.