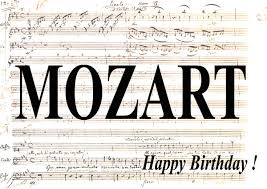 Wolfgang Amadeus Theophilus Mozart lived between 1756 and 1791. He is considered to be a classical composer. Mozart, born in Salzburg, Austria, began composing before most children go to kindergarten. By the time he was six he had played the piano and violin in public.

A Wunderkind, a prodigy of the first rank before the age of five, Mozart astounded the musical world with compositions of unsurpassed brilliance. His father Leopold had recognized his talent at the age of three and immediately set out to teach him to play the harpsichord, violin, and organ. Mozart and his sister made their debut in Munich when he was just six and traveled about Europe together, performing at courts and before royalty, always with success. While still a little child Mozart was inventing symphonies, sonatas, and his first opera. Legends abound about how Mozart could hear an entire work in his head and write everything down without making even one change.

As a child performer he was often treated as a freak. People would cover his hands as he played the piano, make him compose tunes on the spot and perform all sorts of other musical tricks.

Mozart was a prolific composer writing masterpieces using every form of music, including his operas “The Marriage of Figaro” (based on a play by Pierre Beaumarchais), “Don Giovanni”, “Cosi fan tutte” and “The Magic Flute”. His mastery of instrumental and vocal forms, from symphony to concerto and opera, was unrivalled in his own time and perhaps in any other.

Composing the Requiem Mass commissioned for Count Walsegg, he felt he was writing his own requiem and he died before it was finished.

Wolfgang Amadeus Mozart, composer, died in Vienna Austria at the age of 35, penniless, on December 5th, 1791, of malignant typhus. Mozart, the precocious child prodigy, composed several pieces that are deemed central to the classical era. Though he ranked as one of the greatest musical genius, he did not live a life of affluence as none of his compositions earned him a decent commission but the world is forever enriched by such works as Eine Kleine Nachtmusik, the Symphonies No. 38 through 41 and the Coronation Mass.

In the year 2000, there have were some new discoveries about Mozart’s death

You might be surprised to hear what “Ah Vous Dirais-je Maman” is!

Read quotes by and about Mozart

In Praise of Pianos and the Artists Who Play Them

History of the Piano

Books and CD’s by Mozart