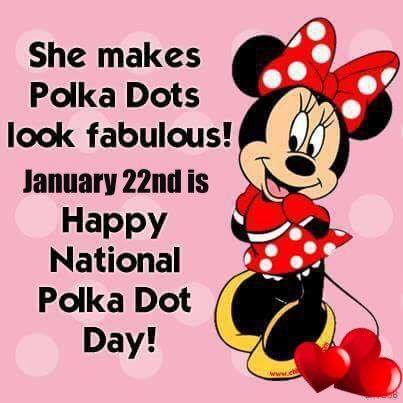 In the nineteenth century, garments with dots began becoming popular. Dotted-Swiss was one such type of garment. In Germany, dots on garments were called Thalertupfen. Dotted clothing could be seen in some famous paintings of the time, such as Monet’s Luncheon on the Grass and Bazille’s Family Reunion.

In the middle of that century, polka dancing became popular in Europe. The name for the dot comes from the dance, although there doesn’t seem to be any real connection between the two. “Polka” is a Polish word for “Polish woman,” and the term polka dot was first printed in 1857, in an American women’s magazine called Godey’s Lady’s Book.

The popularity of polka dots increased in the 1920s and ’30s. Miss America wore a polka dot swimsuit in 1926 and Minnie appeared with polka dots in 1928. Polka dot dresses were common during the 1930s. Following World War II, Dior began putting out dresses with polka dots, and polka dot clothing was worn by stars such as Elizabeth Taylor and Marilyn Monroe. In the 1960s, Yayoi Kusama began using polka dots in her paintings. Some men have worn polka dots, such as Bob Dylan, and Marvel Comics even created Polka-Dot Man. Today, polka dots are often worn nostalgically and have gained in popularity with the revival of vintage wear from the 1950s and ’60s.

Because Minnie Mouse is often seen wearing polka dots, the day has been closely tied to her. Although she appeared with Mickey in Plane Crazy on May 15, 1928, this did not have a wide release, and it is Steamboat Willie, which was released on November 18, 1928, which is widely known as Minnie Mouse’s debut. Independent, feminine, and cheerful, she is known for bringing happiness to others and helping them with troubles they may be having. Walt Disney was the first voice of Minnie, just for a short while, and many people have voiced her since. Russi Taylor began voicing her in 1986 and did so for decades afterward.

After Minnie’s debut in 1928, she appeared in many more short films throughout the 1930s. Mickey and Minnie were redesigned in the late 1930s, but Minnie was used less starting in the 1940s. It was not until the 1980s when she once again began being used more prominently in cartoons. She was in Mickey’s Christmas Carol in 1983 and had her first starring role in a television special with Totally Minnie in 1988. She has since appeared in films such as Mickey’s Once Upon a Christmas, Mickey’s Twice Upon a Christmas, and Mickey, Donald, Goofy: The Three Musketeers, and in television shows such as Mickey Mouse Works, House of Mouse, Mickey Mouse Clubhouse, Mickey Mouse, and Mickey and the Roadster Racers.

Minnie has been featured in comics, video games, and has been a staple at Disney parks such as Disneyland Resort and Walt Disney World, where events have been held on the day. In 2016, an art and fashion show called “Rock the Dots” was held on Polka Dot Day in Los Angeles; it was followed by an exhibit that was open to the public. Disney began encouraging people to wear polka dots and use the hashtag #RocktheDots. Minnie received her star on the Hollywood Walk of Fame on National Polka Dot Day in 2018, during her 90th anniversary year.

Celebrate the day by wearing polka dots. D23: The Official Disney Fan Club and Shop Disney have polka dotted Minnie Mouse clothes and accessories available. Let people know you are wearing polka dots by using the hashtag #RocktheDots. The day could be spent watching films starring Minnie Mouse, such as Plane Crazy and Steamboat Willie. Minnie was not wearing polka dots in those first films, but she was wearing a polka dot dress in their opening title sequences. You could also do some Minnie Mouse crafts, or plan a trip to Disneyland Resort or Walt Disney World.