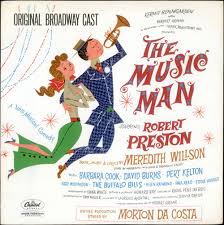 A few years ago TCM was doing 31 Days of Oscars.  I first sort of noticed this when I looked ahead in the scheduling and noticed that all TCM shows were alphabetized.  At first, I thought maybe that this scheme was some sort of placeholder before I realized what they were doing. Personally, I preferred when 31 Days grouped films by nomination category, by studio or by actor. Alphabetical is easy for them but hard on me, looking through every entry to see what to record.

Saturday, we were up to the M’s and Tivo faithfully recorded (The) Music Man.  When I watched it on Sunday, I was most pleased to realize that I remembered all the words.

Remembering all the words is no small feat.

I first started collecting records (yes, records!) of musicals when I was in high school in Springfield, MA.  Our library had an outstanding record collection, but I could only check out one (or 2?) at a time.

I would bring my record(s) home, and listen to them like crazy.  Then I’d save my allowance and any work money I had and go to the local department store to buy my favorites.   I always bought musicals and they were nearly Original Broadway Cast.  Years later, I still have all these records, even though I usually listen on Spotify or on one of my carefully curated playlists. (I also can’t listen to any of the music out of order.)

As the years roll by, many of these musicals, like The Music Man, have gone on to become films.  I am not usually a happy camper when the music is changed from what I remember of the OBCs and the film, but The Music Man film made the cut for me  🙂