Try to find an American Fotoplayer! 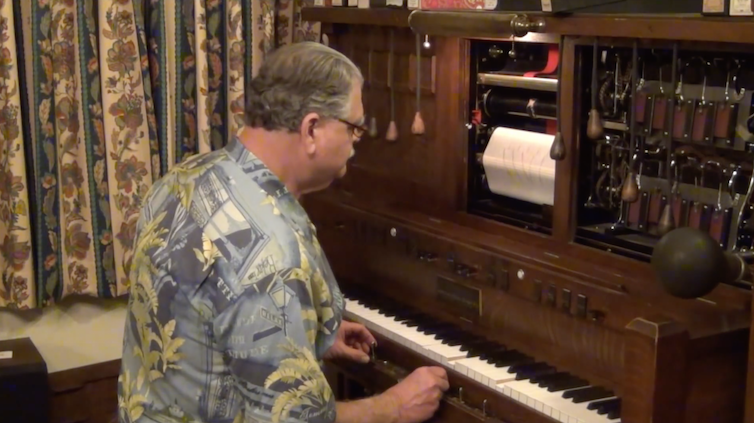 The appeal of the Fotoplayer to theatre owners was the fact that it took no musical skill to operate. The Fotoplayer would play the piano and pipe organ mechanically using an electric motor, an air pump, and piano rolls while the user of the Fotoplayer would follow the onscreen action while pulling cords, pushing buttons, and pressing pedals to produce relatable sounds to what was occurring onscreen. These actions could create sounds such as a steamboat whistle, a bird chirp, wind, thunder, a telephone bell, as well as many others. On Fotoplayers specifically, most effects were created using leather cords with wooden handles on the ends which the effects were directly connected to. For example, the steamboat whistle sound effect was created using a household bellows with a whistle at the end. Pulling the cord compressed the bellows, delivering a gust of air into the whistle. Creating a drum roll on the other hand was a bit more complicated. A clockwork device was needed to time the strikes of the drum which required constant winding.